“Man Boobs.” You’ve heard the term. What many may not know is that breast enlargement in men is a common and treatable condition called gynecomastia. A more technical, academic definition of gynecomastia (other than “man boobs”) is the swelling of breast tissue in boys or men caused by a hormone imbalance.

Indeed, testosterone and estrogen control the development and maintenance of sex characteristics in both men and women, and when the amount of estrogen surpasses that of testosterone, augmented breasts can result in males. 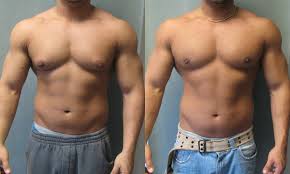 View more “man boobs” before and after pictures.

However, hormone changes aren’t necessarily abnormal. In male infants, more than half are born with enlarged breasts because of their mother’s estrogen. Usually, the swollen breast tissue goes away within two to three weeks after birth. Hormone levels fluctuate during puberty as well, and in most cases, the enlarged breast tissue that may result goes down without treatment within six months to two years. The prevalence of “man boobs” peaks again between the ages of 50 and 80, as testosterone levels naturally decline because of aging. In fact, at least one in four men in this age group are affected.

Of course, other factors can have an unnatural effect on one’s hormone levels. Disorders of the male sex organs (testes), such as Klinefelter’s syndrome, can result in decreased testosterone production and relatively high estrogen levels, resulting in gynecomastia. Testicular cancers may also secrete hormones, leading to the development of breasts.

The Psychological Harm of “Man Boobs”

The psychological impact of gynecomastia can be detrimental, especially if the breast enlargement is pronounced. Many young men have suffered through taunting and teasing over their “man boobs” while in high school and college.

According to Derek Silverman, spokesperson for Man Boobs Lab, “Men suffering from enlarged breasts often refuse to remove their shirts around others. Some hide in their homes, as they are so humiliated by the size of their breasts. Gynecomastia affects one’s self-confidence and self-esteem.”

And with beach season approaching, the desire to correct this condition is even more pressing.

Treatment for “Man Boobs” in NYC with Dr. Douglas Steinbrech

Fortunately, male breast reduction surgery can be performed, restoring a flatter, firmer appearance to the male chest and removing the appearance of the dreaded “man boobs.” Dr. Douglas Steinbrech, one of New York’s top plastic surgeons, performs such procedures on an outpatient basis at the JCAHO accredited office-based surgery facility of Manhattan’s Gotham Plastic Surgery. During surgery, glandular tissue is removed from the breasts, and in extreme cases, excess skin may be extracted as well.

View more of Board-Certified Plastic Surgeon Dr. Steinbrech’s gynecomastia before and after photos

The before and after photos on the website are proof of the effectiveness of such surgery. These men have lost their “man boobs” through effective surgical treatment by Dr. Douglas Steinbrech, a premier gynecomastia surgeon in NYC.

For more information about gynecomastia and it’s ongoing effects, or to schedule a consultation with Dr. Steinbrech in the NYC area, please call (646) 480-7750 or contact us today to receive additional information on male breast reduction surgery.