Reality Men Keep Up With The Trends

Reality Men Keep Up With The Trends

Taylor shared his selfie of his bandage-clad face revealing that he had indeed undergone rhinoplasty surgery.

-And much to his credit, never denying going under the knife.

Unfortunately, Jax’s caption claimed him and a door got into a bit of an altercation a mere two weeks after his previous rhinoplasty procedure. This resulted in an undesirable beak after recovery! He was not anticipating a round two, but circumstances lead to additional work that needed to be performed in order to revise the damaged outcome. 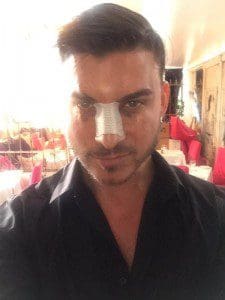 Revision rhinoplasty requires a much more skilled, top board-certified surgeon in order to ensure successful, optimal aesthetic. Plus, male plastic surgery is an ever growing and evolving trend and well, Jax is a trendy guy!

Although, this may not be his first declaration of his affection for plastic surgery, Jax is adamant that this was a necessary procedure. He also expressed he stands behind routine cosmetic maintenance like “a little #Botox touch up.”